The Smithsonian Museum in Washington was among those who were consulted for the plans for the GPO for the 1916 centenary. The GPO Witness History Interpretive Centre which will open on March 29th will be an immersive exhibition allowing visitors to experience the events from an eyewitness perspective of both active participants on both sides and bystanders caught in the middle.

Senator Mark Daly, Spokesperson for the Irish Overseas and Diaspora and the Fianna Fáil representative on the Government’s All Party Consultation Group on the Decade of Commemorations first met with Richard Kurin of the Smithsonian Institute in Washington three years ago as there were concerns at the time that the centre in the GPO would not be ready by the centenary. The Smithsonian, comprising the national museums of the U.S. – almost all of which are national landmarks, has a long and distinguished record of the preservation and renovation of historical public buildings and were pleased to offer suggestions having reviewed Senator Daly’s plans for the GPO 1916 commemorations.

Commenting on the contribution of the Smithsonian, Senator Daly commented: “The museum was generous and helpful in writing a proposal for me about the GPO which was critical in ensuring that instead of only a foundation stone for a museum being laid on Easter Sunday 2016 as was being suggested, that a centre befitting the extraordinary events that took place there would be dedicated to the memory of our greatest generation, this has been achieved thanks to the hard work of An Post and officials”

Senator Daly was also advised on the parameters involved in making it a more suitable historical landmark. This advice was then passed on to the head of commemorations within the GPO. The current €7.8 million project aims at engaging visitors and bringing history to life through touch screens, video, audio visual booths, sound and authentic artefacts. 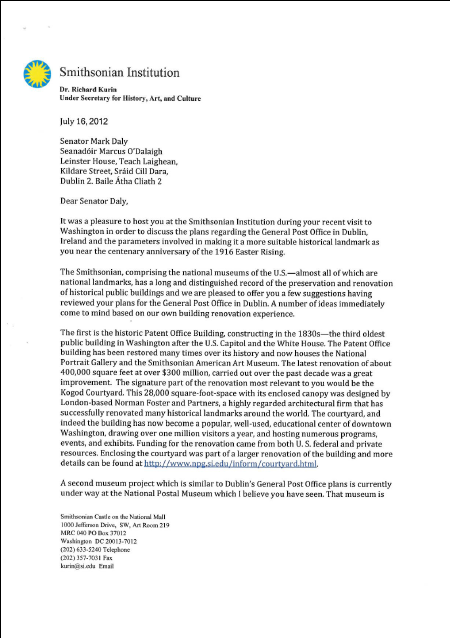 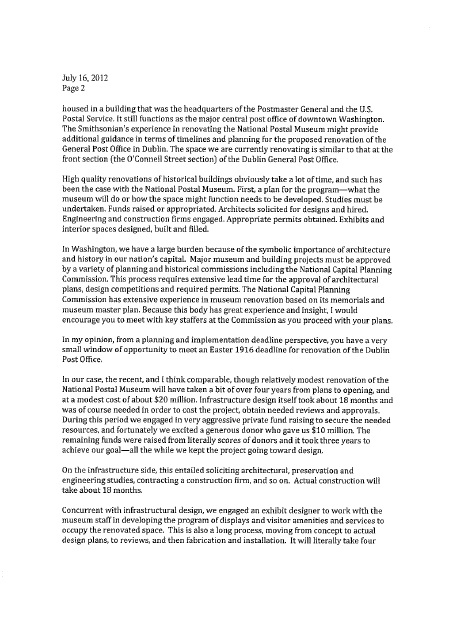