Senator Mark Daly was appointed early 2013 as Fianna Fáil spokesperson for the Irish Overseas and Diaspora, the first such spokesperson in the Oireachtas. With some 70 Million people around the world of Irish Heritage it is a distinct honour to be their voice in the Irish Parliament and Senator Daly released the first policy of any Irish Political Party for the Irish Overseas and Diaspora on Friday 19th of July, 2013. 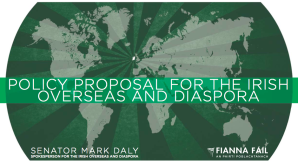 Second Edition Policy Proposal for the Irish Overseas and Diaspora

First Edition Proposal for the Irish Overseas and Diaspora

Senator Daly will continue to consult organisations involved with the Irish Overseas and Diaspora with the intention of improving and adding to the policy.

“I would ask members of the global Irish community to read the policy and to contact me with ideas they have as to how Ireland can engage with those Irish citizens overseas and the Irish Diaspora.  This policy is only the beginning of a new engagement with our citizens outside the state, our citizens overseas and those of Irish heritage.  This will be an on-going process and we aim to continue to expand and improve the policy as new ideas come from our global Irish community.”

US Visas and Immigration

With 40 million of the 70 million global Irish community living in the United States, the US represents Ireland’s single largest Overseas community.

Senator Daly has strongly advocated on behalf of the American-Irish Community in an ongoing campaign to provide visas for the 50,000 undocumented Irish in the United States. The status of many Irish who emigrated to the US over the decades remain without being regularized, and as a result of their current undocumented  status they are unable to access government services or indeed travel home to Ireland. 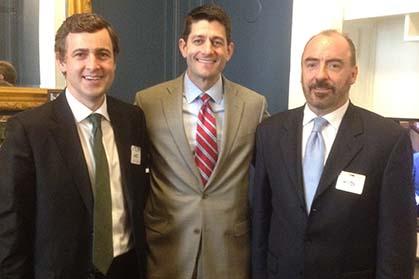 For a look at the ongoing developments in this area click here.