Senator Daly is a Nominee of the Irish Kidney Association to Seanad Eireann and has a strong track record since his election working on behalf of patients waiting on transplants and the families of these patients.

Senator Daly urges for improved infrastructure, training and resources in the area to not only increase the level of organ donation in Ireland, but a more effective system for transplants for all those anxiously awaiting them.

People who want to donate organs altruistically for transplantation are being forced to go to Northern Ireland because of the lack of a dedicated service here, a charity has claimed.

The Irish Kidney Association says it is referring up to half a dozen people a year to the North because there is no provision in the Republic for altruistic organ donation.

With the number of living donors falling substantially last year for the first time in a decade, it says Ireland should follow the lead of other European countries by setting up a service to cater for the needs of the growing number of dialysis patients.

Forty living donors provided organs under the transplantation programme last year, down from 51 in 2017 and the first substantial fall since records began. At present, most living donor transplants occur within families.

Minister for Health Simon Harris marked the beginning of Organ Donor Awareness Week yesterday by announcing improvements to the expenses paid to living donors. This includes a childcare cost allowance of up to €5,000, the payment of up to €10,000 to self-employed donors for staff costs and the payment of expenses to living liver donors.

It has queried Mr Harris’s plans to introduce an opt-out system for organ donation, saying action on the other measures it proposes would do more to increase the supply of donor organs.

Speaking at the launch of Organ Donor Awareness Week, Mr Harris yesterday said he intends to press ahead with the opt-out system, which will form part of the Human Tissue Bill to be published next month.

The IKA says doctors should be able to access information about the almost one million people whose willingness to donate organs is indicated on their driving licences.

“As the Minister has already proposed the introduction of an opt-out registry, it would be a huge missed opportunity not to utilise the existing record of people who do wish to be organ donors,” says IKA chief executive Mark Murphy. “We have this data, and we’re doing nothing with it.”

In addition to the living donations, the organs of 81 deceased people were transplanted in 2018, resulting in 234 organ transplants.

About 550 people are currently waiting for a kidney, heart, lung, liver or pancreas transplant.

Mr Murphy urged the public to carry an organ donor card and to have a conversation with their families about their donation wishes after death.

Figures from the Irish Kidney Association reveal that almost one million people have indicated that they want to be an organ donor on their driving licences; however under the current system medical professionals do not have access to that information.

Senator Daly explained, “Minister Ross has the opportunity to save lives – all he has to do is sign a ministerial order to allow doctors and medical staff access to driving licence information relating to organ donation.  However, he is continuing to refuse to do so.

“Today marks the beginning of organ donor week and it would provide a great boost to organ donors, recipients, volunteers and campaigners if the Minister could realise the impact that a simple stroke of the pen would have on the dozens of people waiting on the donor list in Ireland.

“Minister Ross has already signed similar orders to allow the Courts, the Gardaí, parking clampers and motorway operators eFlow.  Why is he refusing to sign such an order to save lives?  The Minister has cited Brexit and data protection for his failure to sign the order but doesn’t add up when private operators have been allowed access to this very same information.

“We are talking about life and death here, not unpaid fines.  I am urging Minister Ross to realise the life changing impact this simple legislative change would make and sign the ministerial order”, concluded Senator Daly. 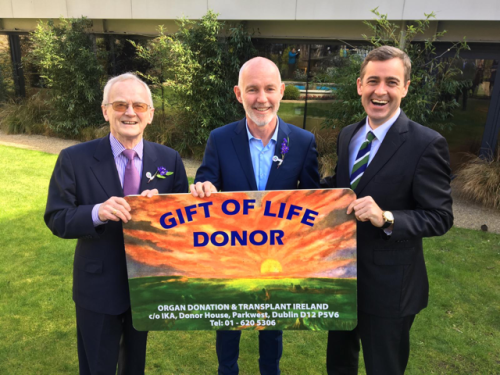 GREATER access to driver’s licence records could lead to more organ donations and save more lives, it has been claimed.

Almost one million people have indicated on their driving licence that they want to be organ donors.

However, this information is unavailable to healthcare professionals.

Cork woman Isabel Terry underwent a double lung and heart transplant in 2017 at the age of 42 after spending 15 years on the waiting list.

“It’s very important that doctors can access information and know if people want to be organ donors,” she told The Echo.

“But it’s also hugely important that the next of kin know, as at the moment, they’re the ones that make the decision at the end of the day.

“Even if a person has expressed their desire to donate their organs, their next of kin can say no and medical professionals won’t go against that,” she added.

“That needs to change and we need to discuss organ donation a lot more.

“A lot of people might have their organ donor card or their licence ticked and their next of kin might not have realised.

“Then it might be an easier decision for them to make, to allow the donation to happen, if they knew.

“It could save lives. Organ donation saves lives all the time and I know that I wouldn’t be here today if it wasn’t for my donor.

“Time was running out for me and I literally had just a couple of months to live,” said Isabel.

Fianna Fáil Senator, Mark Daly, has demanded a change in the law to allow greater access to this information, which he said would save more lives.

He has called on the Transport Minister to allow medical professionals access to driving licence information so that they can establish if a driver licence holder is an organ donor.

“Since 2013, driving licence applicants have been asked if they would they be willing to be an organ donor,” explained Mr Daly, who was nominated to the Seanad by the Irish Kidney Association.

“This means that those involved in the facilitation of organ transplants often miss out on potential donors,” he added.

Fianna Fáil Spokesperson on Transport, Robert Troy TD added: “Medical professionals, and the families of people who want to donate their organs, need to be given this information as soon as possible.

Fianna Fail’s Mark Daly said nearly one million drivers have indicated their willingness to donate on their licences.

But he alleged Mr Ross is refusing to allow health care professionals access to this information.

Ahead of Organ Donor Week, which begins tomorrow, Mr Daly called for a change in the law.

He added: “It is unacceptable and short-sighted not to allow information that could save and transform lives to be shared with medical professionals.”

Comments Off on Minister Ross ‘risking lives’ in donor row

FIANNA FÁIL has called on Transport Minister Shane Ross to allow healthcare professionals to have access to driver licence information for organ donation.

Senator Mark Daly said inaction by the minister prevented healthcare professionals from knowing if a person was an organ donor or not.

He said that without access to this information, doctors organising organ transplants are missing out on potential donors.

Mr Ross has blamed Brexit for not being able to “examine the matter in detail” and said the HSE needs to be consulted on this in a response to the Seanad on March 13.

However, Mr Daly has criticised this response and said a simple Ministerial Order needs to be signed.

“There are around 2.6 million driving licence holders in Ireland at the moment,” Mr Daly said.

“Since 2013, driving licence applicants have been asked if they would they be willing to be an organ donor.

“This means that those involved in the facilitation of organ transplants often miss out on potential donors.”

In a lengthy response to the Seanad, Mr Ross said that under current EU regulations they would need the permission of the applicant to share such information.

Currently if a person opts into this, a code 115 is printed on the driving licence.

“There is also a risk that people might be reluctant to volunteer to have a code 115 on their driving licence if they had concerns about their data being shared,” he said.

Mr Ross said he wanted to hear the views of the HSE on the potential for doctors to be able to look up a list of potential organ donors.

“Currently, in light of other priority commitments and particularly the demands of work in relation to Brexit, the resources have not been available to examine the matter in detail.

“This is something that can and will be considered in the future,” he said.

However, Mr Daly said the minister needs to act to save lives.

“The Government allows driving licence details to be shared with other State bodies such as the Courts Service, the Road Safety Authority and the Health and Safety Authority, and most recently Minister Ross allowed access to a private company, E-Flow, to assist the management of the M50.”

However, the exact information provided to E-Flow is unclear.

Fianna Fáil’s transport spokesman Robert Troy said: “This is an important yet simple change, and I feel the Government’s laissez faire approach to this issue is not acceptable.”