Category Archives: 1st ever report by a Dáil or Senate Committee on uniting Ireland “Brexit and the future of Ireland, uniting Ireland & its people in peace & prosperity”

Research Report “Brexit and the future of Ireland, uniting Ireland & its people in peace & prosperity”

‘Brexit and the Future of Ireland: Uniting Ireland & Its People in Peace & Prosperity’

This is the first ever report by a Dail and Senate Committee on the issue of Uniting Ireland and its People in Peace & Prosperity for the Joint Oireachtas Committee on the Implementation of the Good Friday Agreement. Please see below the link to this report. The all-party committee adopted the report unanimously, along with its 17 recommendations. I have begun working on these recommendations with appropriate experts in their fields to ensure progress. 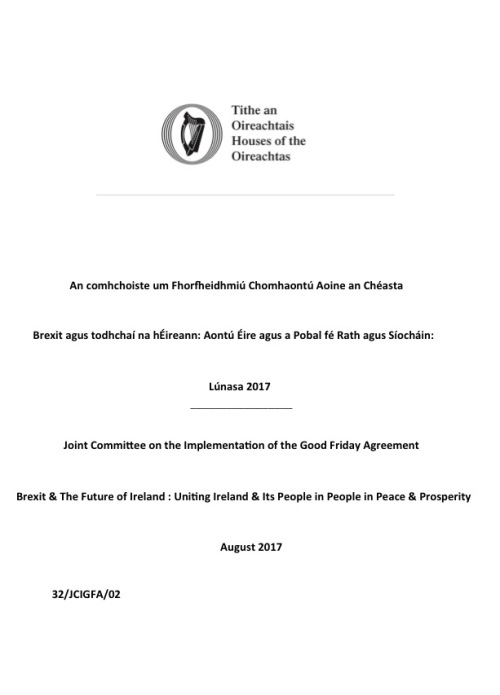 The report for the Joint Committee on the Implementation of the Good Friday
Agreement has seven sections;

Section 1 : Brexit & its impact on Ireland

Section 4 : Brexit and the Future for Ireland

Section 6 : Referendum as Provided for in the Good Friday Agreement

Section 7 : Constitutional & Legal Changes Before & After a Referendum

‘We were, therefore, left with only one choice, a policy of seeking unity in Ireland between Irishmen. Of its nature this is a long-term policy, requiring patience, understanding and forbearance and resolute resistance to emotionalism and opportunism. It is not the less patriotic for that’

The Irish government must negotiate for Northern Ireland to be
designated with special status within the EU and for the whole island
of Ireland to have a unique solution as part of the Brexit negotiation.

If current EU funding programmes cannot be protected then the
eligibility of Northern Ireland for receipt of EU Structural funds and
other funding schemes and mechanisms must be clarified as a matter
of urgency, to help underpin the peace process.

The Report on the All-Ireland Economy: compiled in 2016 by Peadar
Tóibín TD for the Joint Oireachtas Committee on Jobs, Enterprise and
Innovation in the light of Brexit should be updated.

Any passport controls between Ireland and the UK should be along the
same basis as for people traveling between these islands from 1939 to
1952. There should not be a return to passport controls on the borders
between the North and South of Ireland.

Given the likely impact on certain categories, including women, in border
counties and employment in these areas there is a need for impact
analysis on these sectors of society

Welcome the declaration agreed to by the European Council on 29 April
2017 which provides for Northern Ireland automatically becoming part of
the EU in the event of a future united Ireland.

This declaration, known in Brussels as ‘The Kenny Text’, is similar to that
of Commission President Jacque Delors in January 1990 on the issue of
German Unification ‘East Germany is a special case’.

It is recognised that World Trade Organisation rules and a hard border
would have a detrimental impact on Ireland North and South & Further
impact assessment is required on the economic impact of reunification.

The Committee urges that the matter of EU funding for Northern Ireland and
the border region remains high on the agenda and an expeditious solution is
found for successor programmes after 2020.

The establishment of a New Ireland Forum 2 is recommended to set a
pathway to achieve the peaceful reunification of Ireland.

Establish an international task force with experts in security so that plans to
meet any risks may be devised and implemented.

Fears and concerns of the Unionist community need to be examined,
understood and addressed comprehensively by all stakeholders in advance
of any referendum.

Explore potential solutions to resolve disputes that may arise from the
implementation of the Good Friday Agreement, as recommended by High Court
Justice Kevin Humphreys.

Lessons from referendums need to be learned to ensure that the Irish
government fulfills its constitutional obligations.

‘The European Parliament and German Unification’ by Marc Birchen

‘Ireland and the UK from 1916 to Brexit’ by Martin Mansergh

‘Political Party positions on the Unity of Northern Ireland

Behaviour and Analysis poll results attitude to the future state

Red C poll results on the Unification of Ireland

‘End of the beginning, reflection on Brexit and prospects’ by Kevin Meagher

Every Treaty signed between Ireland and England

Comments Off on Research Report “Brexit and the future of Ireland, uniting Ireland & its people in peace & prosperity”