Fianna Fáil Senator Mark Daly reintroduce the National Anthem (Protection of Copyright and Related Rights) (Amendment) Bill, in Seanad Éireann on January 24th, the first Seanad sitting week of 2019. The Bill, which seeks to give official recognition to the Anthem and protect it from use for advertising purposes, was first introduced in 2016 but lapsed with the dissolution of the Dáil and Seanad.

In 2017 and 2018 the Seanad Public Consultation Committee convened a public consultation on the National Anthem. The report produced following the consultation found very favourable public support for the anthem and that protocols in relation to its use should be introduced.

As report rapporteur Senator Daly was happy to see the public engagement and the desire to protect the Anthem as much as possible from any use in commercial advertising. The National Anthem belongs to all Irish people, it is a key symbol of our identity yet it lacks protection.

Senator Daly first introduced this Bill in 2014 due to the lapse in copyright. After being contacted by constituents, unhappy with the idea of the Anthem being used for advertising purposes. Following this, I worked with members of all Parties and the Seanad Public Consultation Committee and we published this report in June 2018.

One of the findings through our work on this report was that there is a need to formally adopt the Anthem in the Irish language as this has never been done by the State.  However it was also brought to our attention that there was no official version of the anthem that could be performed by members of the Deaf Community through Irish Sign Language. The Deaf Community themselves have undergone a very thorough consultative process and have composed the official Irish Sign Language National Anthem which is provided for in this Bill.

2019 marks the 110th Anniversary of the Anthem being written by Peadar Kearney and I think it is very fitting, as we continue with the Government’s Decade of Commemorations, that we move forward with this very simple Bill. It will protect our National Anthem from being used in advertising and give official recognition to the Sign Language and Irish Language versions. 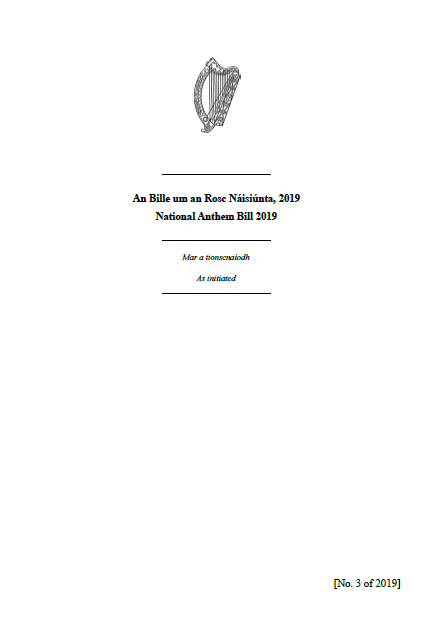