The new research shows that Northern Ireland would have a near balanced budget in a unification situation. 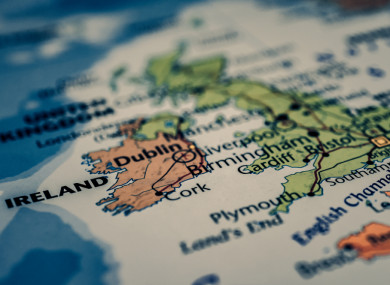 THE DEPARTMENT OF Foreign Affairs has been accused of wanting to delay the publication of research on the cost of a united Ireland until “after Brexit”.

Fianna Fáil Senator Mark Daly stated he was concerned that when a draft of the research was discussed by the members of the Good Friday Agreement Implementation Committee that a member of the committee said department officials he had spoken to said that they did not want the research released until “after Brexit”.

An IMF senior economist during German Reunification, Gunther Thumann, carried out the research, along with Daly, for the Oireachtas Committee. It shows that Northern Ireland would have a near balanced budget in a unification situation.

Speaking about calls to delay the report publication, Daly said with Brexit negotiations at a difficult point, and the stalemate in Stormont, he believes officials wanted the report pushed back.

This is unacceptable interference by the Department of Foreign Affairs in the work of the Dáil and Seanad. Last year, I compiled the first ever report by a Dáil or Seanad committee on the issues surrounding the peaceful unity of Ireland, for the Joint Oireachtas Committee on the Implementation of the Good Friday Agreement.

This report entitled Brexit & the Future of Ireland Uniting Ireland & its People in Peace & Prosperity was adopted unanimously by the committee. One of the key recommendations is to ascertain the true level of the income and expenditure for Northern Ireland, a key concern of many on this island, both North and South.

The latest research into the costings is a follow-through on one of the commitments of last year’s report, which was adopted unanimously by the committee, added Daly.

The fact that officials in the Department of Foreign Affairs do not what this information released and the motivation behind it need to be answered.

When contacted by TheJournal.ie, there was no denial from the department, with a spokesperson stating it would not be commenting at present.

Prior to the publication of the 2017 report, Dr Kurt Hubner of the University of British Columbia, who came before the Joint Committee, constructed economic models of scenarios of Irish unification, one of which showed a benefit of €36.5 billion in the first 8 years of unification.

Sinn Féin has also argued it would be beneficial to Ireland and has published a report to dispel what it calls the “unaffordability myth” that it might cost £24.1 billion – the figure some commentators claim is spent by Britain on the North.

Pensions and the public service

In the Thumann research, which has not been published, but has been circulated to Oireachtas members, he argues in his research that pensions would initially be the responsibility of the British Government as the pension liability was accrued while Northern Ireland was part of the United Kingdom.

These would not be a liability of a new agreed Ireland, argues the economist.

In his research, Thumann explains that not all the accounting adjustments figure attributed by Westminster to Northern Ireland of £1.1 billion would be applicable in a reunification scenario either.

Thumann also also reports about the convergence of the public service numbers between the north and the south.

Combining the group of public servants would bring a saving of £1.7 billion per annum in the current budget expenditure of Northern Ireland.

While these adjustments are of a mainly statistical nature the report states it show that the £9.2 billion Northern Ireland deficit figure is not a meaningful measure of the Northern Ireland fiscal situation under unification.