Discord in the Seanad over protocol for Irish anthem 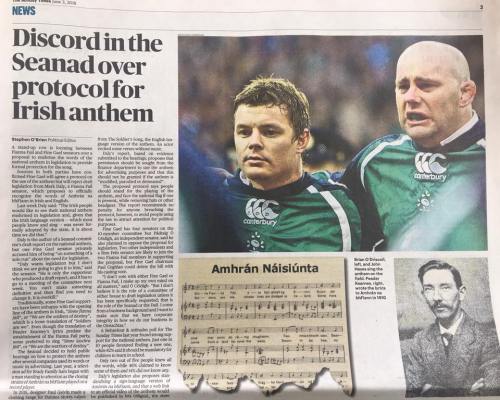 A stand-up row is looming between Fianna Fail and Fine Gael senators over a proposal to enshrine the words of the national anthem in legislation to provide formal protection for the song.

Sources in both parties have confirmed Fine Gael will agree a protocol on the use of the anthem but will reject draft legislation from Mark Daly, a Fianna Fail senator, which proposes to officially recognise the words of Amhrán na bhFiann in Irish and English.

Last week Daly said: “The Irish people would like to see their national anthem enshrined in legislation and, given that the Irish language version — which most people know and sing — was never formally adopted by the state, it is about time we did that.”

Daly is the author of a Seanad committee’s draft report on the national anthem, but one Fine Gael senator privately accused him of being “on something of a solo run” about the need for legislation.

“Daly wants legislation but I don’t think we are going to give it to him,” said the senator. “He is only the rapporteur who produced a draft report, and it has to go to a meeting of the committee next week. You can’t make something definitive and then find you need to change it. It is overkill.”

Traditionally, some Fine Gael supporters have been unhappy with the opening line of the anthem in Irish, “Sinne fianna fáil”, or “We are the soldiers of destiny”, which is a loose translation of “Soldiers are we”. Even though the translation of Peader Kearney’s lyrics predate the establishment of the Fianna Fail party, some preferred to sing “Sinne laochra fáil”, or “We are the warriors of destiny”.

The Seanad decided to hold public hearings on how to protect the anthem after several companies used its words or music in advertising. Last year, a television ad for Brady Family ham began with a man standing to attention as the closing strains of Amhrán na bhFiann played on a record player.

In 2015, designer Paul Galvin made a clothing range for Dunnes Stores called Warriors Are We, based on the first line from The Soldier’s Song, the English language version of the anthem. An actor recited some verses without music.

Daly’s report, based on evidence submitted to the hearings, proposes that permission should be sought from the finance department to use the anthem for advertising purposes and that this should not be granted if the anthem is “modified, parodied or demeaned”.

The proposed protocol says people should stand for the playing of the anthem, and face the national flag if one is present, while removing hats or other headgear. The report recommends no penalty for anyone breaching the protocol, however, to avoid people using the law to attract attention for political purposes.

Fine Gael has four senators on the 10-member committee but Pádraig Ó Céidigh, an independent senator, said he also planned to oppose the proposal for legislation. Two other independents and a Sinn Fein senator are likely to join the two Fianna Fail members in supporting the proposal, but Fine Gael chairman Paul Coghlan could delete the bill with his casting vote.

“I don’t vote with either Fine Gael or Fianna Fail, I make up my own mind on all matters,” said Ó Céidigh. “But I don’t believe it is the role of a committee of either house to draft legislation unless it has been specifically requested; that is the role of the Seanad or the Dail. I come from a business background and I want to make sure that we have corporate integrity in how we do our business in the Oireachtas.”

A Behaviour & Attitudes poll for The Sunday Times last year found strong support for the national anthem. Just one in 10 people favoured finding a new one, while 82% said it should be mandatory for children to learn in school.

Only two out of five people knew all the words, while 46% claimed to know some of them and 14% did not know any.

Daly’s legislation also proposes standardising a sign-language version of Amhrán na bhFiann, and that a web link to an official video of the anthem would be published in Iris Oifigiúil, the state gazette.