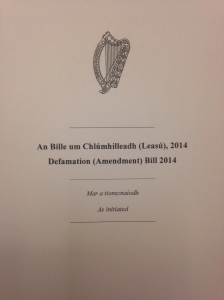 Senator Mark Daly:  I wish to thank the Minister of State for his contribution. I would also like to thank Senators Crown and Barrett, and especially Mr. Shane Conneely, for their work on this important legislation, which relates to the awesome and overwhelming power of the State to silence people who have information and wish to criticise the State. The Minister for Health spoke yesterday about the ambulance service. I have had meetings with paramedics who raised concerns with me many months ago. They cannot simply come forward and give the powerful testimony of what they have seen and what they know is wrong with the system, which is a matter of life or death to those who will need their services.

Our protection of whistleblowers has been poor. In 2002 the Irish Bank Officials Association, IBOA, asked for whistleblower legislation to protect people in the financial services industry. The reply from the State, the civil servants, who guard that famous building where all our legislation originates – which is not this building because more often than not it comes from the civil servants – was that we need a more comprehensive Bill. It is not enough for the financial services to have whistleblower protection. We must have it for everybody. If that had been in place between 2005 and 2008 would people have come forward to say the place is going to explode and Anglo Irish is a shell of a company? Maybe they would. The civil servant who raised it in the Department of Finance was ostracised and had no protection. Those who criticised it were vilified. The power of the State against the individual is awesome and overwhelming.

The case of Louise O’Keeffe is connected to this. She took on the State and the State informed her and everybody else when she was defeated in the High Court that it would clean her out, for what she had done. When the Supreme Court gave its ruling the State wrote to all those who had taken cases against it saying their cases were exactly the same as hers and that they would lose as she did, and would lose their houses. Many backed down. She took it to the European Court which thankfully reversed the decision of the Supreme Court. The State wrote again to all those people and told them this time that their cases were different from hers. That is the awesome power of the State against the individual. At every opportunity we must take the power from the State and give it to the individual.

Senator Crown is quite clear about the defamation being limited to €1 but it does not mean that there cannot be special damages. If somebody makes reckless allegations for example that the electricity from the ESB causes cancer but electricity from another supplier does not, the ESB can take an action and be awarded only €1 under this legislation but special damages can be awarded. It offers protection to the State body but also guards against reckless behaviour by citizens.

We want to encourage the citizens in a country where there is little courage and little support for whistleblowers. A person would want to be very brave to come forward against the State because of its awesome and overwhelming power. As Senator Barrett pointed out, not only does it have overwhelming power but it can use all its resources, financial and other, against the individual. In a country that has suffered for so long because of the silence of those who knew better, and knew much more than they were ever willing to tell, people must be encouraged in every way possible to bring forward what they know and tell it to the public and the press. If those paramedics spoke on radio and television and said it was a fact the whistleblower legislation might protect them from being absolutely destroyed by their management. I know many who would come forward if they did not feel the overwhelming power of the State to destroy them and take everything they have. If the Government gave them every possible protection they would speak out. Speaking out is vital. It has not happened enough. The financial crash happened and the child abuse issue went on for so long because those who knew did not have the courage and were not given the protection, I do not know in which order. I often feel they did not have the courage but the protection was not there either. We have to rebalance and overbalance it. The power rests with the State. It must rest with the citizen.

Comments Off on Defamation Bill 2014

Filed under Transparency in Government