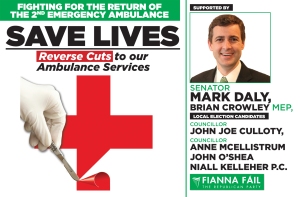 Senator Daly said “I would urgently ask for this meeting to be called, as a result of the disastrous consequence of the current ambulance provision system. The loss of the second emergency ambulance presents a danger to our community, who deserve rapid care during medical crisis”.

The Fianna Fail candidates in the Killarney Electoral area Niall Kelleher, Councillor John Joe Culloty, Councillor Anne McEllistrum, John O’Shea are campaigning for the return of the second emergency ambulance to Killarney. To date they have distributed 20,000 leaflets informing the people of the area of the risk to lives caused by the loss of ambulance, with a further 30,000 leaflets due to be distributed in the coming weeks. The reinstatement of the ambulance will be the centre of the local elections in the Killarney local election area.