A presentation in Killarney last night to public representatives by the head of the National Ambulance Service Martin Dunne was shown to contain flaws during questioning by Senator Mark Daly. 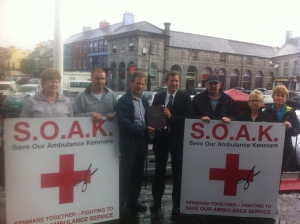 Senator Daly has said “It can only be described as a presentation to Senators, TD’s and councillors that was designed to cover up the reduction of ambulance services to the people of Kerry”.

The shocking admission that Killarney town, whose population increases during the summer and every weekend – will see a serious compromise of service, means a reduction to the availability of vital emergency care to not only local people but to the many visitors to the Killarney area as well.

“GP’s and the medical profession in Kerry are expressing serious concern to me about the proposed reduction of the ambulance service – which if it goes ahead, will mean that the people of Kerry’s lives will most certainly be put at risk.

I am concerned that this is going to be a case of ‘death by geography’ stated Senator Daly.

The presentation shown at the meeting will be examined for further flaws, and Senator Daly has called for a second meeting within a month within which all the doctors and communities affected would be present to have their serious concerns heard and questions answered .