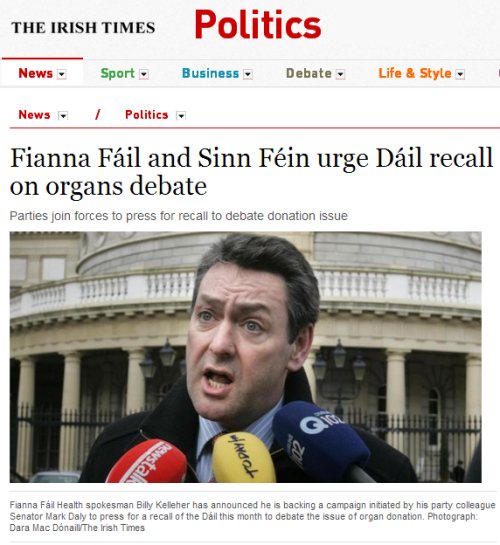 Fianna Fáil and Sinn Féin have joined forces to press for a recall of the Dáil this month to debate the issue of organ donation.

Fianna Fáil Health spokesman Billy Kelleher announced this morning that he was backing the campaign initiated by his party colleague Senator Mark Daly, who has already succeeded in getting a recall of the Seanad to discuss the issue next Tuesday.

Sinn Féin Health spokeman Caoimhghín Ó Caoláin later announced his party’s support for the move and said the Government’s inadequate implementation of EU regulation of the issue needed to be addressed.

While the Seanad will meet to discuss the issue on Tuesday, the support of the Dáil would be required for any change in an EU directive on organ donation.

The EU regulation governing standards for organ donation will come into effect on August 27th unless it is amended by both Houses of the Oireachtas before that date.

For the Dáil to be recalled, a motion would have to be signed by 56 TDs, a third of the membership.Fianna Fáil and Sinn Féin have 33 TDs between them – so the support of another 23 is required for a recall.

Even if another 23 signatures can be obtained, Ceann Comhairle Sean Barrett has 10 days in which to decide whether the Dáil should be recalled.The Government is adamant the regulation is legally sound and does not have a bearing on the issue of consent to organ donations, which is the issue raised by Mr Daly.

Even if the Dáil is recalled, the secure Government majority means there will be no change in the regulation.Minister for Health James Reilly has already announced he will be bringing forward new legislation on organ donation, and has instituted a consultation process on the matter.

Be part of the Conversation! Tweet @SenatorMarkDaly to follow our progress on recalling the #Seanad and Dail Eireann to debate & annul this flawed legislation, and stay up to date on Mark’s work for Organ Donation and Transplantation in Ireland here. The Seanad will be recalled from recess next Tuesday, 20th August.